Austria has a population of approximately 8.25 million. It shares borders with Switzerland, Liechtenstein, Germany, Czech Republic, Slovakia, Hungary, Slovenia and Italy. Austria has a very strong transport system of which it is rightly proud, with a road network comprising approximately 1,720 km of motorways and approximately 475 km of dual carriageways.

Austria’s road infrastructure is managed by ASFINAG with the country’s top priority being to optimise road safety for all drivers. There are some 6,900 parking spaces in the ASFINAG network for the safety of lorry and bus drivers. As a result of this common-sense approach to road safety, all HGV drivers can easily comply with their legally prescribed breaks.

The rest area concept developed by ASFINAG delivers more safety and convenience with all new rest areas being well lit, fitted with video cameras and emergency phones, and modern sanitary arrangements and family-friendly facilities. The new rest areas are currently being fitted with defibrillators for first aid.

For vehicles with more than 3.5 tons maximum permissible weight (MPW) (which includes all lorries, buses and heavy camper vans), a mileage-based toll applies on Austria's motorways and expressways.

A driver must have a GO-Box (a fully electronic toll payment system) for any lorry over 3.5 tonnes maximum permissible weight (MPW) before driving onto a motorway or expressway. The toll can only be paid if you have a GO-Box, which is available from many GO-Box outlets. The rates depend, among other things, on the number of axles, the number of kilometres driven and the vehicle's EURO emission class. Payment may be made  either in advance (pre-pay) or afterwards (post-pay), or it can for example be settled directly with ASFINAG via GO Direkt. 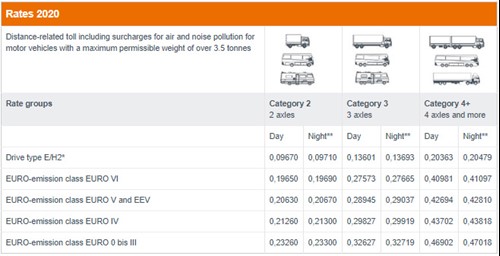 An increased rate (+25 % on the basic kilometre rate) is also applied for the A12 on the Lower Inn Valley route (between the border at Kufstein and the Innsbruck/Amras intersection).

The EURO emission class of the vehicle over 3.5 t MPW affects how much toll is due. The lower emissions, the cheaper the toll.

UK hauliers may carry goods to, through or from the country. Goods can also be carried from Austria to a third country and vice versa if permitted by the terms of any agreement between the three countries.

Cabotage is permitted, but a correctly completed control sheet must be carried on the vehicle. Control sheets are issued by Federal Ministry for Transport, Innovation and Technology, Radetzkystraße 2, A-1030 Vienna. A copy of the Austrian Cabotage control record is available to download below.

The ADR agreement is in place and will apply. It should be noted that where vehicles are carrying dangerous goods and comply with all ADR requirements, there are specific additional requirements for the vehicle which may include additional lighting/beacons and/or escort vehicles where the vehicle movement has to travel via certain tunnels.

For more information visit the UNECE website at the link below & select the country name applicable
http://www.unece.org/trans/danger/publi/adr/country-info_e.html

On the ASFINAG network of roads, more than 10,000 special transports are carried out every year.

All abnormal load operators will require a keeper’s certificate to prove ownership of the trailer which must be carried as part of the vehicle documents at all times.
An application form can be downloaded below:

Where to get a permit for special transport

To carry out special transport in Austria, a request has to be submitted to the responsible provincial government. This has to be done via the Austrian e-Government-platform for special transports. In the course of the application, all the information necessary for the permit, such as planned route, detailed information on vehicle weight, axle loads, lorry bans on 3rd & 4th lanes of Motorways, distance between axles and vehicle dimensions, as well as the requested driving period, has to be stated.

The E-government-platform also contains useful information and links on the topic (for example a short summary of the Austrian Motor Vehicles Act, instructions for submitting a request and for using the platform, as well as information on the responsible authorities).

As the operator and maintainer of the high-profile road network in Austria, ASFINAG issues a statement to the responsible authorities for every special transport request affecting its road network. The statement is incorporated in the permit, which is issued by the responsible provincial government.

Additionally, special transports, depending on their dimensions, have to register with ASFINAG’s facilities in advance of the scheduled transport movement.

In general, special transports wider than 3.50 metres and/or higher than 4.30 metres are obligated to register with ASFINAG‘s regional traffic management centres and road maintenance departments (local registration). In addition, in certain cases, the central registration with the national traffic management centre is also obligatory (typically for special transports wider than 5.00 metres and/or heavier than 100 tonnes). If this is the case, it is also obligatory to communicate the actual departure time of the transport, longer breaks, as well as the arrival time of the transport.

TIR & ATA Carnets are accepted (conditions of use apply). CMR notes are required. All goods in free circulation do not require customs documents unless they are excise goods.

Lorry driving ban in 3rd and 4th lane of motorways/expressways

Since 1 June 2014, a driving ban for Lorries on the third and fourth lane of motorways and expressways has been in place in Austria. This ban is based on an expert report by the Austrian Road Safety Board from 2013. According to the report:

This applies throughout Austria from Saturday, 3 pm to Sunday, 10 pm and on public holidays from midnight until 10 pm. It applies to:

Certain food transports, if a consignment note or loading list can be produced, are exempt from this ban. The foods include fresh food such as fruit and vegetables, milk (products), meat (products), fish (products), eggs, mushrooms, baked foods and confectioneries.

This applies on all Austrian roads for heavy goods vehicles with more than 7.5 tonnes MPW between 10 pm and 5 am.

Please use the following link to view all public holidays in Austria. Also bear in mind that there are many local holidays in specific regions/cities https://www.feiertage-oesterreich.at/2020/

If the UK fully leaves the EU on 31 January 2021, HGV drivers will require travel insurance with healthcare cover

Other compulsory safety equipment requirements are:

The following speed limits are applicable to all heavy goods vehicles over 3.5 tonnes GVW: