Within Great Britain (GB), either GB domestic or EU rules may apply. For international journeys, either the EU rules or the European Agreement Concerning the Work of Crews of Vehicles Engaged in International Road Transport (AETR) may apply.

Which set of rules applies depends on the type of driving and the type of vehicle being used, and, in the case of international journeys, the countries to be visited.

Most vehicles used for the carriage of goods by road and with a maximum permissible weight (including any trailer or semi-trailer) of over 3.5 tonnes are within the scope of the EU rules.

‘Carriage by road’ is defined as any journey entirely or in part made on roads open to the public by a vehicle, laden or unladen and used for the carriage of passengers or goods.

‘Off-road’ driving is in the scope where it forms part of a journey that also takes place on public roads. Journeys made that are entirely ‘off-road’ are out of the scope of the EU rules.

International journeys to or through countries that are outside the EU but are signatories to the AETR are subject to AETR rules.

An international journey means a journey to or from another EU member state, including the part of the journey within the UK.

For journeys that are partly in the EU and partly in countries that are neither in the EU nor signatories to AETR, EU rules will apply to that portion of the journey that is in the EU.

Countries outside the EU and AETR are likely to have their own regulations governing drivers’ hours, which should be adhered to whilst driving in that country. If this is applicable to any journey to be undertaken, it is essential that the relevant embassy is consulted to determine what the rules are in the country in question.

Vehicles that are exempted from the EU rules come under GB domestic rules on drivers’ hours while engaged in domestic journeys.

This flowchart will help you determine which rules apply in connection with the use of a goods vehicle. 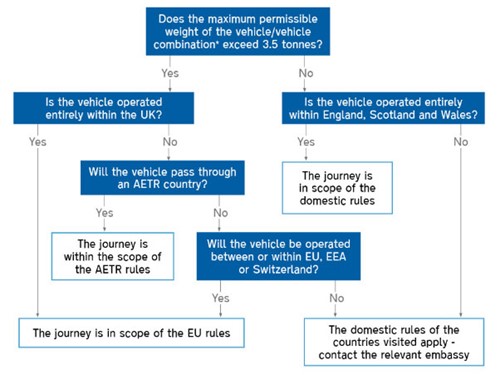 For a list of the EU, AETR and EEA Countries