Road traffic legislation imposes specific requirements on employers in respect of vehicle use and maintenance.

But employers also have a responsibility under Health and Safety legislation to ensure so far as reasonably practicable the health and safety of their employees and others who may be affected by their work activities. This includes the activity of driving on public roads.

The majority of road users are undoubtedly car drivers, who in the main rarely if ever, undertake any further driver training after they have passed their driving test. Drivers operate powerful vehicles in high speed, competitive and stressful environments which are often shared with vulnerable road users, including children, the elderly, cyclists, pedestrians and horse riders. Also, they are often under significant pressures to complete their journeys as quickly as possible and to cope with a range of distractions, most notably using mobile phones.

There are several areas where road safety can be improved and the list below is the main areas, which, if all drivers were to adhere to would have a significant impact upon reducing death and injury on the road.

Asides from the obvious points listed above, there are other areas where road safety can be improved.

Undoubtedly, the condition of our roads must figure highly here, as properly constructed and well-maintained roads is an obvious factor in ensuring roads are safe. It must also be noted here that where the subject of construction is concerned, this also means roads that drain properly during inclement weather and minimise the risk of vision impairment and aqua-planning.

There can be no argument that the improvement and further provision of secure overnight lorry parking facilities and service areas across the country will go a long way to improving the safety of our roads.

Considering the imposed legislation on commercial drivers, unlike other EU countries, the UK very sadly lacks an adequate number of rest and overnight parking areas offering refreshment and high standards of toilet/washing facilities. There can be no argument that a driver who has rested, eaten properly and had the opportunity to take a shower is a driver who feels refreshed, alert and is undoubtedly safer as a result.

This is also the case with lay-bys and most especially because: 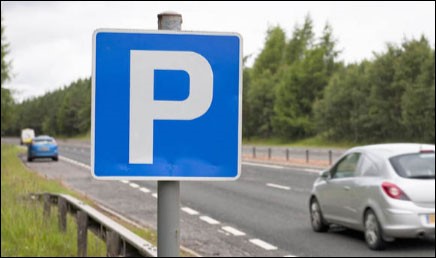 The consequences of drivers not having access to safe truck stop/rest areas are very serious as not only does the quality of their rest have a real impact on the safety of their driving, but it also puts them at the mercy of the criminal fraternity who target commercial vehicles.

Having somewhere to park safely with proper facilities also gives drivers of commercial vehicles the opportunity of checking their loads and vehicles to ensure that the remainder of their journey is completed safely for themselves and other road users.

If a wheel is lost from a commercial vehicle on a UK road, there will be an investigation, probably carried out by DVSA, and/or the Police, and it is likely that the company, and whoever was driving, will come under intense scrutiny, a possible Public Inquiry (PI) and likely prosecution, subject to the findings of the investigation.

Wheels come off commercial vehicles most notably if:

The following report was written by Gary Thomas (IOSH Magazine) in June 2019 and is a reminder of the many issues surrounding wheel loss in commercial transport.

“Despite advances in modern technology, the fundamental issue of wheel detachment continues to be a major concern for the commercial vehicle industry.

When a wheel becomes detached from a moving bus, coach, truck or trailer, it can accelerate to 150 km/h. This has been likened by academics to a bouncing bomb, as the vehicle wheel can soar to substantial heights of up to 20 metres or more before dropping and potentially colliding with other road users at an equivalent force of around ten tonnes.

A Transport Research Laboratory (TRL) report into wheel loss on commercial vehicles, published for the Department for Transport in 2010, estimated that each year there were between 7,500 and 11,000 wheel fixing incidents. Of these, some 150 to 400 resulted in wheel detachments, with 50 to 134 causing damage, ten to 27 leading to injury, and between three and seven resulting in a fatality.

There are many reasons why a wheel may come off a moving commercial vehicle.

Consider a standard heavy truck wheel fixing for a moment. There are typically ten studs and nuts holding that wheel assembly on to the axle. The clearances that allow studs and rim holes to line up are generous so there is potential for movement -- and you are reliant on nut heads and enough torque to hold the wheel in place.

As the wheel turns, it is subject to thermal expansion, vibration and axial forces. These forces load on to one or two studs in sequence rather than all ten simultaneously. The effect is that those generous tolerances present a less-than-perfect mechanical set-up.

The TRL report suggested the standard design of wheel fixings required a thorough maintenance regime to "adequately reduce the risk of detachment". However, even the best-maintained vehicles can still be prone to mechanical failure or human error”.

The following report was written in May 2020 and concerns the safety on Europe’s roads. The full report is available to download in pdf format at the end of this shortened version.

A quarter of road deaths in the European Union are the consequence of a collision involving a goods vehicle, according to the European Transport Safety Council (ETSC), authors of a new report on the safety of goods transport by road.

Last year the EU agreed to increase the minimum safety standards for new lorries from 2026 by e.g. enabling drivers to see other road users more easily through larger windscreens and transparent panels indoors, and by requiring pedestrian and cyclist detection systems.

As the detailed technical specifications for these standards are currently being worked out, ETSC is calling for high standards to be implemented.  In the short term, ETSC recommends local authorities follow the example of cities like London, by granting lorries access to city centres based on their level of safety.

ETSC is also calling for road infrastructure that better protects vulnerable road users from interaction with goods vehicles, such as separated cycle lanes.

For further reading on road safety, please visit the links below: