The maximum permissible weights and dimensions of goods vehicles in the UK have traditionally been set out in the Road Vehicles (Construction and Use) Regulations 1986. However, EU legislation in the form of directives has been incorporated into these regulations. Directive 85/3 set common weights and dimensions standards for vehicles used in International transport. Directive 96/53 superseded the earlier directive and applied the weights standards to domestic transport.

On 1 January 1999 directive 96/53 regarding weight limits was made law as part of the Road Vehicles (Authorised Weight) Regulations 1998 and was not included within the Construction and Use Regulations as a further amendment.

The Authorised Weight Regulations run in parallel with C&U Regs, operators may choose to comply with either set of regulations. However, you cannot comply with a combination of the two regulations.

The information laid out in the tables below shows both Construction and Use (C&U) and Authorised Weight (AW) rules. However, please be aware, it is not possible to operate to the weight limits in the AW regulations whilst using the axle spacing’s specified in the C&U regulations. 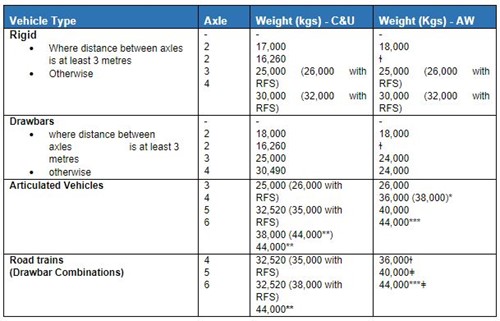 Many tables detail the regulatory requirements within the C&U Regs, to simplify matters, the Department for Transport (Dft), introduced a simple calculation as shown in the table below.

By using this calculation, it is now straightforward to calculate the weight at which a vehicle will be allowed to operate under the authorised weight regulations. It must be noted, however, that the factor will vary according to the number of axles, as follows:

The calculated figure should be rounded up to the nearest 10kg if the resultant calculated number is less than the maximum authorised weight.

The current normal maximum weight for a goods vehicle is 44 tonnes. This has been the case since the regulations changed on 1 February 2001. Some conditions have to be met for this weight to be permitted.

With effect from 1 January 1999, 5 axle combinations can operate at 44 tonnes only if the vehicle is carrying a 40 ft. ISO container as part of an International and multi-modal (road and rail) journey. The driver must have documents to prove this throughout the journey.

An earlier regulation allowed 44 tonnes on six axles only from March 1994. The rules are quite prescriptive and require an ISO container on a multi-modal journey or ‘piggyback’ road/rail semi-trailer, no goods added or removed during the journey and documentation detailing the movement of the goods and the railhead being used. There are also restrictions on the type and weight of the axle.

The following table lays out the axle weight limits by Construction & Use and Authorised Weight limits. 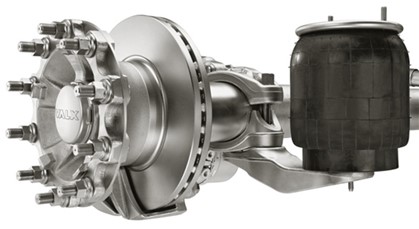 The weight that two "closely spaced" axles (two axles spaced at least 1.02 metres but not more than 2.5 metres apart) on a motor vehicle, drawbar trailer or semi-trailer, may impose on the road depends on two factors:

The regulations provide a scale-dependent on these distances and plated weights.

The weight that three "closely spaced" axles (where the outermost axles are spaced not more than 3.25 metres apart; and no axle has a plated weight exceeding 7,500kg mpw) on a motor vehicle, drawbar trailer or semi-trailer may impose varies depending upon the axle spacing between any adjoining axles.

The requirements were simplified with the introduction of the Road Vehicles (Authorised Weight) Regulations 1998. The changes came into effect from 1 January 1999.

The Road Vehicles (Construction and Use) Regulations 1986
https://www.legislation.gov.uk/uksi/1986/1078/contents/made